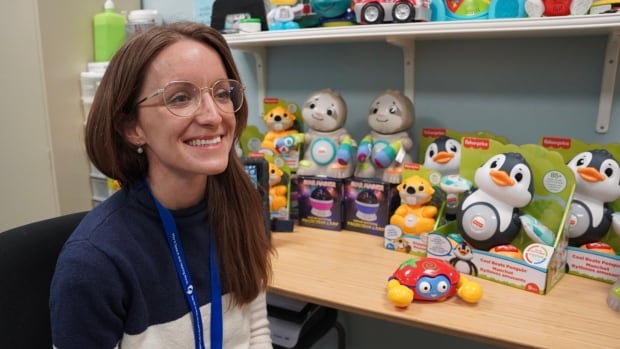 A group of volunteers from across the Maritimes is on a mission to make toys that everyone can play with.

Volunteers from a program called Makers Making Change recently modified more than 20 new toys to be accessible to children with disabilities and donated them to a toy library at the IWK Children’s Hospital in Halifax.

Many store-bought toys with small buttons and parts are not easily accessible to preschoolers with complex communication needs or physical disabilities, and modified toys can cost $150 to $300.

Emily Goulet, a speech pathologist at the IWK who manages the library of accessible toys, said the 20 new toys will make a huge difference.

“There’s nothing I hate more than giving a family a toy and saying, ‘We’ll need it in two weeks.’ So I’m very happy to be able to say, “Here’s a toy and you can keep it and it’s yours,” Goulet said.

The cost can be prohibitive

Goulet said many families cannot afford to buy suitable toys for their children. She said if it’s a mobility device or a toy, parents need to prioritize.

“So to be able to provide these toys for free to families is huge…We are so lucky to know that Makers Making Change [because] they show people and train them how they can adapt toys.”

Cameron said the group typically focuses on assistive technology for adults, but began working on accessible toys since connecting with Goulet and his colleagues at the IWK.

The toys are modified to be compatible with something called a switch, which is basically a button to turn things on and off.

“If a child is having trouble reaching a certain button on a toy, it may be that their fine motor skills aren’t able to grasp it,” Cameron said. “It could be a range issue. Then we’ll adapt it so we can move the button to where they need it.

“A really big part of it is letting the child play with something independently instead of needing someone to push a button for them.”

Goulet said adults can use switches for complex processes like communicating with a tablet. This means it’s important for children to learn switches through play, so their skills can develop as they get older.

“You can really see when the kids make that connection that they have that power over the toy, that they’re the ones making it sing, and the dancing is really powerful for them.”

“Everyone can do it”

The process of adapting toys is simple, Cameron said.

“We sort of open them up and just make some extra wires and then we also drill holes where we can basically plug in a switch or a button,” she said.

Cameron said anyone can learn to do it and it takes about an hour per toy.

Kerilyn Kennedy is a co-op engineering student who worked on the toys. She said about 80% of people with disabilities use assistive technology.

“Not everyone can afford the business options, if they even exist,” Kennedy said. “So to be part of an organization that can provide some of these open-source, affordable options is great.”

Cameron said the group plans to start adapting more toys and is always looking for more volunteers in the Maritimes.

Store-bought toys may be inaccessible to children with disabilities. Adapted toys are expensive. A local group modifies them and donates them to people who need them. 2:26