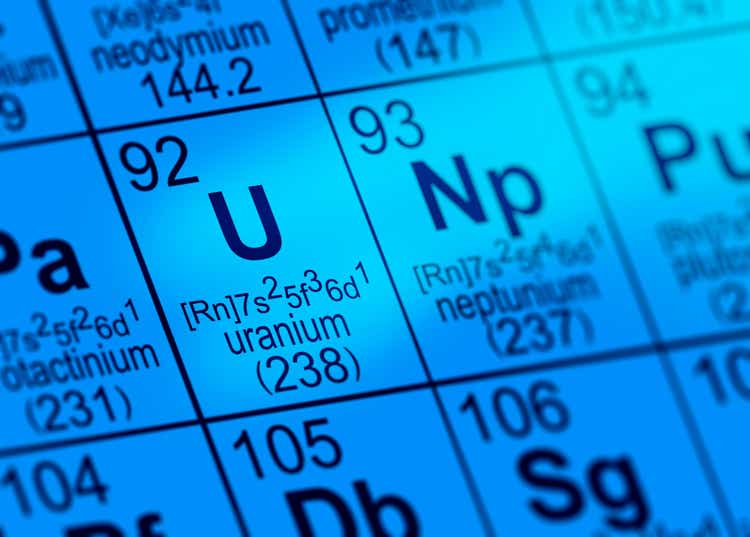 In August 2019, I wrote a bullish SA piece on Global Atomic (OTCQX:GLATF) (GLO:CA) and it’s among my best calls yet as the stock price soared over 500% since then.

In In my opinion, the Dasa Uranium Project looks more compelling than ever, but I think Global Atomic looks overvalued at the moment despite the market valuation dropping nearly half in the past few months. Let’s review.

Presentation of the activity and finances

Global Atomic’s Dasa Uranium Project is located in Niger and has been featured several times in my “Best Drill Interceptions In The Metals Mining Sector For The Week” article series in 2019. It is similar to many other deposits of uranium in the country, with the expectation of an exceptionally high rating. Dasa is the highest grade sandstone-hosted uranium deposit in the world as well as the largest high-grade discovery in Africa in the last 50 years. According to a feasibility study as of 2021, the project has reserves of 47.2 million pounds of uranium at an average grade of 5,267 ppm. Indicated resources, meanwhile, amount to more than 100 million pounds of uranium.

I expect reserves and resources to increase significantly in the near future as Dasa embarks on a 15,000 meter drilling program in 2022 which includes both fill and step-out drilling. Global Atomic is expected to update the mine plan by the end of the year.

Turning our attention to Dasa’s key financial figures, the feasibility study showed once again that project development made sense even at $30 a pound of uranium. Thanks to the high grades, Dasa is on the way to becoming one of the cheapest uranium mines in the world. All-in sustaining costs (AISC) are expected to be just $21.93 per pound over a 12-year mine life.

Dasa is expected to produce a total of 45.4 million pounds of uranium in Phase 1, with the first four years of commercial production being particularly strong. Yet the current mining plan represents only 20% of current mineral resources and Global Atomic hopes drilling and high uranium prices will help it keep annual production above 4.5 million pounds of gold. uranium for the next two decades.

The initial investment required for Dasa Phase 1 is $208 million, including $18 million of contingency. I think that’s a significant amount for a company the size of Global Atomic, but funding it shouldn’t be difficult. You see, the company owns a 49% stake in a zinc oxide recovery plant in Iskenderun, Turkey. The facility processes electric arc furnace dust (EAFD) containing 25-30% zinc from local steel mills. It produces a 70% zinc oxide concentrate which is sold to foundries.

In the first quarter of 2022, the zinc recycling plant processed 19,785 tonnes of EAFD despite a 3-week maintenance shutdown and Global Atomic’s share of EBITDA was C$3.4 million (2. $6 million).

The facility is majority owned by European industrial services company Befesa and was closed for most of 2019 for expansion and modernization. In March 2022, the JV company operating the plant had to repay $2.65 million of a loan for the upgrade. This means dividends to shareholders are expected to resume in the coming months, helping Global Atomic fund its 2022 drilling program. Revenue is expected to increase in the second quarter of 2022 as no maintenance shutdowns are scheduled for this quarter.

In 2021, Global Atomic’s share of the zinc plant’s EBITDA was C$11.3 million ($8.7 million). Based on a conservative valuation of 8x EV/EBITDA, I think the company’s stake in the facility should be worth around $70 million. In my opinion, ownership of this project sets Global Atomic apart from other development-stage uranium miners and should help it secure debt financing. The company has already received a letter of interest for C$75 million ($58 million) for project funding from Export Development Canada and expects to complete Dasa’s financial package by the end of 2022. .

All in all, I think Global Atomic owns part of a valuable zinc business as well as one of the best undeveloped uranium projects in the world. However, the company seems overvalued at the moment. Development-stage mining companies rarely trade above 0.5x net asset value (NAV), which would bring Dasa’s valuation to C$234 million ($181 million) at the current spot price of the uranium at $50 a pound. Add another $70 million for the 49% stake in the Iskenderun zinc plant and we arrive at $251 million. This translates to approximately $1.41 per share.

That being said, I think short selling Global Atomic shares could be dangerous because uranium prices are notoriously volatile. Additionally, most uranium producers and developers are currently valued at more than 1x NAV. So my conclusion is that risk averse investors should avoid Global Atomic unless the stock price drops further.

Global Atomic has one of the few uranium projects in the world that can be profitable even at $30 a pound and the exploration potential looks good. He also owns a 49% stake in a profitable zinc plant that is expected to resume paying dividends in a few months, helping Global Atomic fund its 2022 drilling program.

However, I think development-stage mining companies are overvalued by more than 0.5x NAV in almost all cases. Luckily for potential investors, Global Atomic’s stock price has been falling rapidly since mid-April and I think the stock will be attractive below $1.40.